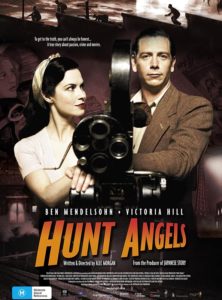 “…one of the best Australian films of the year. 4 stars”
David Stratton, ABC At the Movies

Rupert Kathner and Alma Brooks were the Bonnie and Clyde of Australian showbiz.

He was an artist (although some might say con artist!) and a dreamer. She was a secretary at the local film studios, with a mysterious past and enough sass to get what she wanted. When they met in the late 1930s, a revolutionary duo was born.

The maverick couple, fondly known as Rupe and Alma, began a moviemaking spree that took on the Hollywood barons, a Police Commissioner and the cultural cringe. They were young, in love and on the run from the police and the dark forces of the city wanting to shatter their vision… But Rupe and Alma would stop at nothing to realise their dreams to make movies. Ben Mendelsohn (Animal Kingdom) stars with Victoria Hill (Macbeth) in this fascinating, tall-but-true tale of a wonderfully original Australian couple.

“…one of the best Australian films of the year. 4 stars”
David Stratton, ABC At the Movies

“The larrikin spirit of the man – and woman – is well captured in the film’s stylish production.”
Urban Cinefile

A Mirror to the People