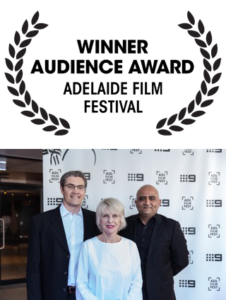 Amanda Duthie, Artistic Director and CEO of ADL Film Fest said “From all the amazing films from all over the world premiering in the Festival, the audience has chosen three peculiarly Australian stories as their favourites, Australians want to see their stories and identity reflected on the big screen, and that is delivered so brilliantly in these three titles.”

The Audience Awards, presented by the festival’s new venue partner GU Film House, were voted by the audience following each screening in the festival.

GU Film House Area General Manager Anthony Kierann said “GU Film House is proud to be the partner for the Audience Awards. One of the key principles of GU Film house is the cinema experience for the audience, and its wonderful to award these films that have had such an impact on the festival audience. Congratulations to the winners for presenting such unique film experiences and the Adelaide Film Festival for presenting so many amazing films during the festival for the audience to consider.“