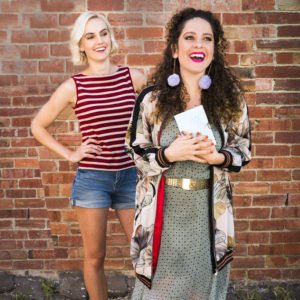 The new Australian drama comedy webseries Other People’s Problems created by Penelope Chai and Jane Dickenson and produced by Charlotte Seymour, will launch on ABC iview December 4 this year.

The original series created for iview showcases a powerhouse of Australian female creative talent. Alongside Penelope, Jane and Charlotte, is director Erin White whose many credits include At Home with Julia and Wham Bam Thank You Ma’am and Sue Maslin (The Dressmaker) as executive producer.

All five episodes of the series will launch on iview as part of ABC COMEDY, a new multiplatform brand that spans a TV channel (replacing ABC2), ABC iview, ABC listen and key social media platforms. Devoted to providing Australian audiences with an unrivalled comedy offering, ABC COMEDY is a mix of scripted and non-scripted, long and short form TV shows, and podcasts.

The series is based on the real-life website clothingforcorrespondence.com created by the writers Penelope Chai and Jane Dickenson and is distributed by Film Art Media.