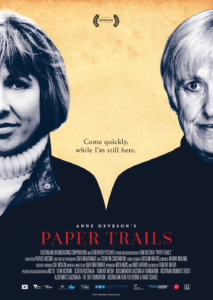 Film Art Media and Generator Pictures today debuted the trailer for documentary film PAPER TRAILS, which follows the beloved Australian broadcaster, writer, activist and mental health advocate Anne Deveson AO as she reflects on her life, memory and history while racing against time to pack her 85-year paper trail into boxes destined for the National Library of Australia.

The film is set to premiere at the 2017 Antenna Documentary Film Festival on Wednesday, 11 October before it is broadcast nationally on ABC TV’s Compass on Saturday, 14 October at 6pm, as part of Mental Health week.

When Braithwaite met Anne in 2015, she was attempting to bundle up thousands of private papers for the National Library of Australia (NLA). She offered to help and over the next six months they transform Anne’s 85-year paper trail into a mountain of brown boxes for the permanent collection at the NLA.

But during this time, Anne’s brain starts to fail her. Alzheimer’s, the illness that took her mother and grandmother, is gaining hold and she is feeling the pressure to move into care. While she has stacks of miscellaneous files to sort, Anne has resolved to keep living in her own home, on her own terms. It took over six months to archive Anne’s life into 150 neatly packed boxes. The prevalence of digital technology today means that Anne’s generation will be the last to have such a long ‘paper’ trail.

PAPER TRAILS contains never before seen archive from Anne Deveson’s collection, including unpublished writings from her final journal. Anne’s archive is now stored in the permanent collection of the National Library of Australia, so that future generations may explore, discover and continue the adventure.