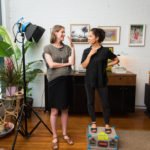 They offered their services as letter writers for people who were struggling to put pen to paper. In exchange, they asked for an item of pre-loved clothing from the letter requestor’s wardrobe.

Penny and Jane’s love for hand-me-downs came from their keen interest in clothes coupled with their desire to tread lightly on the Earth. Their idea to offer themselves as letter writers came from their love of letters and the written word.

It wasn’t long before Clothing for Correspondence was receiving letter requests from all over the globe: Melbourne, Sydney, Perth, Brisbane, Wellington, Suva, Kansas City, London, Budapest, the list goes on.

They’ve now written over 100 letters – of complaint, confession, celebration, condolence and, of course, love. And while the predicaments are always unique, and often hilarious, the themes are universal. Fundamentally, Clothing for Correspondence is about people wanting to connect with other people.

As an early fan of the project, producer Charlotte Seymour teamed up with Penny and Jane to help turn their letters into a short form television series – Other People’s Problems – which will be seen on ABC iview and ABC2 this summer as part of ABC’s “Binge on Comedy”.

Recently described by ZDF – one of Europe’s largest television distributors – as “chicken soup for the soul”, Other People’s Problems was written by Penny and Jane, and stars Maria Angelico (Sisters) and Ainslie Clouston (Wham Bam Thank You Ma’am).  It was exec produced by Sue Maslin.

“Other People’s Problems reflects on some of the more bewildering aspects of human interactions for those who sweat the small stuff. It’s about striving to connect and the never ending task of finding your place in the world.”
~ Jane Dickenson | Writer and Creator, Other People’s Problems

“Other People’s Problems is about friends and strangers trying, and occasionally failing, to connect. It’s about the messy minutiae of these interactions and how other people’s problems can sometimes help us understand our own.”
~ Penelope Chai | Writer and Creator, Other People’s Problems